5 Strongest Infill Patterns Every 3D Print Slicer Should Have 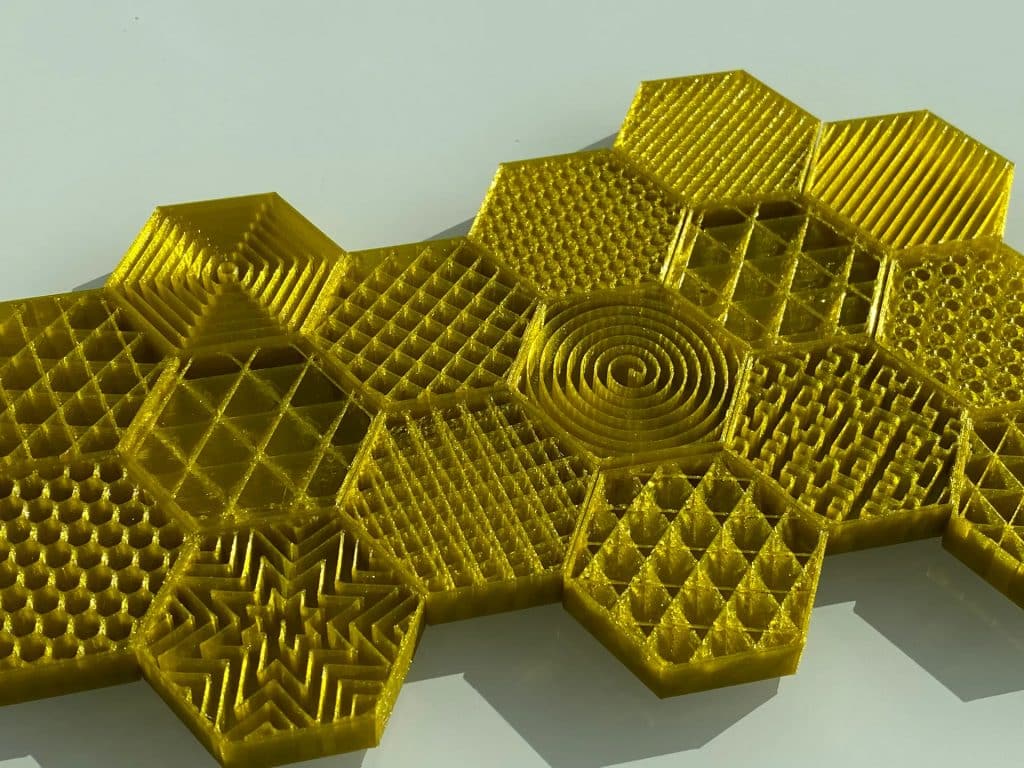 If you own a 3D printer, you’re familiar with infill, the “filling” that allows printed items to be solid, hollow, or any combination of the two. Because conventionally made objects are either totally solid or hollow, infill is unique to 3D printing.

Infill density and pattern are two slicer variables that govern how a 3D printer prints infill. Both parameters significantly impact the mechanical qualities of a printed object; therefore, pay attention to these settings if you wish to produce sturdy parts. However, it’s also vital to remember that many other factors, other than infill, influence the robustness of a print (material and shells, for example).

In this post, we’ll look at infill patterns that are likely to produce strong prints. We’ll use a few of the best patterns available in popular slicers like Cura and PrusaSlicer to lead our conversation. But before we start, let’s go further through the infill density and pattern settings.

It’s All About Infill

Infill density essentially relates to how solid the inside of a 3D print is. This is sometimes stated as a percentage: 100% would be solid, whereas 0% would be hollow. The infill pattern is thus the form or shape of the infill structure within the print.

The higher the infill density percentage, the greater the strength (along with material consumption, weight, and print time) and the lower the flexibility. However, depending on how the structure and placement of the lines disperse internal forces, the infill pattern can also affect strength. Diverse patterns, like other variables (for example, layer height), are helpful for different applications in this way.

Many infill patterns are available across various slicing platforms, but only a few are designed to yield high-strength components. Most of them, such as the lines, zig-zag, and cross patterns, are intended for routine prints that will not be subjected to great physical stress but must still be pretty robust.

Check out our page on 3D Print Infill Pattern: Which One Is The Best For Your Needs to learn more about the various infill patterns.

There are a few crucial factors to consider when determining which infill pattern produces the strongest parts. The first is an infill pattern’s directional strength, and the second is the type of strength measured in testing.

Not all patterns produce the same strength across all three axes (X, Y, and Z), and several are better suited to specific planes. The grid pattern, for example, is quite strong along the Z-axis but weaker throughout the XY plane. Consider positioning your model so that the area of the print that needs to be strong is aligned with the axis along which the infill pattern is strongest to get the most out of patterns that are strongest along particular axes.

Some patterns provide more balanced strength across the three axes. Unfortunately, the individual axis strength decreases when the strength is spread out. The gyroid infill pattern, for example, gives balanced chiefly strength in all three dimensions. Still, it isn’t the most robust pattern along the Z-axis.

The sort of strength measured in testing an infill pattern is the second significant issue. We’ll go over each of the strongest patterns and their outcomes in two different testing methods later in this article: elongation and compression. The former includes delivering a force to two ends of a model to tear it apart. In contrast, the latter involves placing downward pressure on a model, squeezing it until it breaks.

All of the research in this article performed strength tests on the prints’ Z-axis. Each test, whether elongation or compression, was carried out against the printed model’s original configuration. For instance, if you printed a cube and then compressed it, you would squeeze the top section of the cube.

One of the investigations additionally looked at the strength of the pieces along the X and Y axes. Identical parts were rotated 90 degrees and subjected to the same compression test as the original orientation parts. Testing the XY plane and the Z-axis provides a complete picture of a part’s overall strength.

Before we get into the patterns, it’s worth noting that we determined the strongest infill patterns using empirical evidence from three distinct reputable examinations. We’ve included the following tests since they provide an unbiased and objective look at the optimal infill patterns:

There are many more strength tests for 3D printing and infill patterns available. Still, we chose these three because they all show the data in the same unit of measurement (failure load in kg). The experiments also used professional testing procedures and maintained the conditions (printing material, infill density, printer used, etc.) throughout all models evaluated.

Recommended reading:  How much is the cost of 3D printing?

Now that you’ve learned more about infill and different sorts of strength, it’s time to go through the best infill patterns. The 5 most potent patterns found in Cura and PrusaSlicer are discussed here.

The grid pattern comprises two sets of lines that cross each other at the same position in each layer. The grid pattern’s strength stems from the many lines that intersect in this design, which offers a lot of support for the printed structure.

CNC Kitchen discovered a tensile strength of around 50 kg, with a weight and print time comparable to other patterns. In terms of compressive strength, they found that a small cube printed with the grid pattern could withstand up to 350 kilograms of force along the Z-axis and roughly 200 kilograms of pressure along the X- and Y-axes. The maximum compressive strength measured by Steam Labs was 455.2-kilogram-force.

The rectilinear (zig-zag) pattern is similar to the grid pattern in that it prints one set of lines per layer, changing the direction of the lines each time. The strength of this rectilinear pattern stems from the alternating layer method, which makes it more challenging to break the structure from one direction.

The triangle pattern is similar to the grid pattern in that it forms 2D triangles that stack on each layer instead of right-angle crossings. The power of this pattern stems from the fact that triangles are one of nature’s strongest geometries, as each side is dependent on the other two.

When printed, the cubic infill pattern provides diagonally stacked cubes that resemble conventional and inverted pyramids. Because of the structural integrity of the crossing triangles, the cubic design gives three-dimensional strength.

Unfortunately, Steam Labs did not test this infill option, which is also missing from CNC Kitchen’s first test. Fortunately, it has been tested in CNC Kitchen’s second test. The compressive strength of the cubic pattern is similar along all three axes, around 250 kilogram-force, with the strength along the X- and Y-axes marginally ahead. This test also discovered that the cubic design took substantially longer to print, with a 125 percent normalized print time and a model weight comparable to, if not less than, most other patterns.

The honeycomb pattern mimics the general shape of a honeycomb by repeating small hexagonal 2D structures across the area of an object. The alternating interlocking of complex geometric elements gives this design its strength.

The honeycomb infill design came second in Steam Labs’ test for greatest compressive strength, withstanding 430.75 kilogram-force. The tensile strength of the “complete honeycomb” design was determined to be above 12 kilogram-force with relatively low weight in CNC Kitchen’s initial test.

The second test by CNC Kitchen discovered a compressive strength of under 350 kilograms along the Z-axis and 200 kilograms along the X- and Y-axes. It’s also worth noting that the honeycomb infill pattern had a 310 percent normalized print time percentage in CNC Kitchen’s second test. The continual change in the direction necessary for printing a honeycomb pattern accounts for the abnormally long print time.

Finally, the gyroid infill pattern is by far the most appealing. It makes use of repetitive mathematically generated curves piled unusually. The overlap between the curves roughly every three layers (depending on the slicer) and the mathematical aspect of the curve’s shape contribute to the pattern’s power.