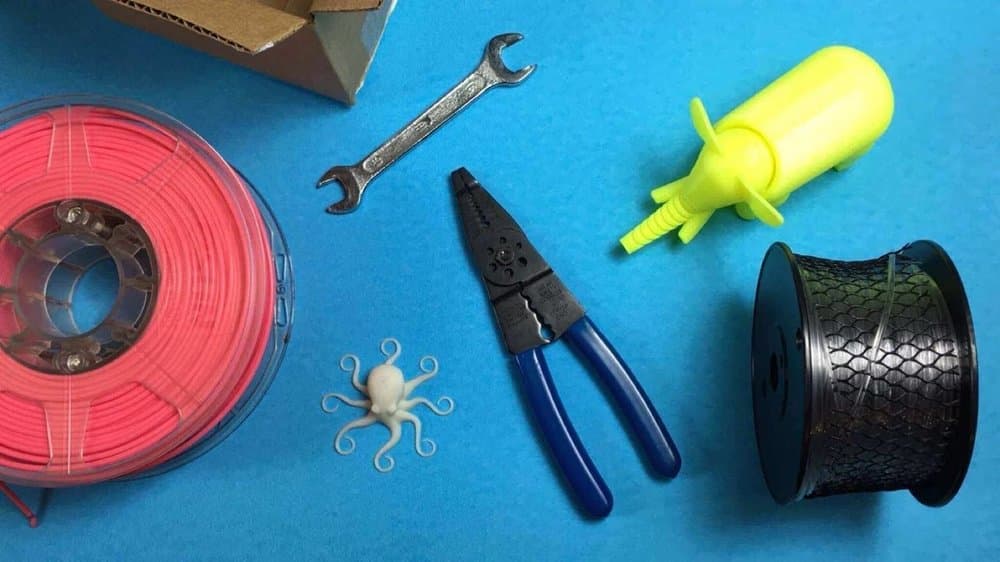 3D print subscription boxes, such as the Maker Box and Alien3D’s UFO, are a fun way to keep your 3D printing supplies topped up. Continue reading to see our top picks.

Subscription boxes have gained popularity in various categories recently, from makeup to drones and 3D printers!

A subscription box is a box of supplies that arrives once every one, two, or three months and is typically related to a specific interest. 3D print subscription boxes are special because they always contain various supplies, so you have no idea what you’ll get before opening them.

Although some people believe these boxes aren’t a good value because the business that organizes them makes a profit, many people love the excitement and surprise of opening one. For example, 3D print subscription boxes include filament samples or spools, an attachment (such as thermal paste), or stickers.

This post will look at a few fantastic 3D print subscription boxes. Since each box contains unique objects, it’s difficult to say what’s inside, but we’ll go over what each one might contain (guaranteed). We’ll also send you a rundown of each package, including the cost, frequency, and supplies.

We curated a list of the best and most exclusive choices for you. Unreleased filaments and 3D printing accessories are included in some shipments, while larger filament samples are included in others. Choose a box that represents your desires while still being used for your 3D printer.
When your subscription arrives, revel in the surprise!

Alien3D is an online store that offers 3D printing supplies from brands such as Filamentum, BMG, Slice Engineering, and others. Alien3D has a monthly subscription box called the UFO (unidentified filament object) that contains more than just filament.

The box is available in various sizes, including 1.75- and 3.00-mm options. Four 20-meter filament samples from well-known and high-end brands are included in the UFO case. The filament samples are usually PLA or a PLA variant (such as silk PLA), but they may also be PETG or HIPS. The filaments in each UFO box are humorously themed for each month, according to BV3D on YouTube.

A component (e.g. a nozzle) or a tool for your 3D printer is also included in this package (e.g. a file blade). A UFO box will include swag such as stickers and possibly even coupon codes for some brands. There are also plans for a project that uses the electronic components included in the package, as well as some pieces that will need 3D printing.

If you don’t want the filament samples, Alien3D also sells a monthly package that contains only the swag, codes, project, and accessory for around half the price of the complete box.

Protopasta is a well-known 3D printing filament manufacturer that produces a wide range of filaments under the Protopasta brand, ranging from PETG to conductive PLA. The Endless Pastabilities filament subscription package, which is sent every two months and includes a variety of popular Protopasta filaments, is one of their most popular offerings.

Each box contains three samples of 1.75-mm filament. You can also choose the amount of filament you want for each of the three samples with Protoplant (50 grams, 100 grams, or 500 grams). If you choose the above, each sample will arrive wrapped around a spool rather than in a bag, making printing much easier.

The Pastabilities box is special because it contains unreleased HTPLA, Protoplant’s “hella tough” and “heat-treated” PLA rows. This means you’ll get PLA samples that have never been seen before and are only available to a select few. Pastabilities is said to have fun filaments in odd colors, according to customers.

Each box has a theme, according to Protoplant, so all of the filaments will be identical (texture, transparency, etc.). The company has previously developed several innovative filaments. What makes you think it’s so special? Bacon filament is different from other filaments.

Another online retailer of 3D printing supplies is 3D Printing Gear, which sells Pallete, Flashforge, and MakerGear items. The Mondo box from 3DPG is a subscription box that includes a few filaments, swag, and other goodies.

3D Printing Gear claims that their Mondo box comes with five 20-meter filament samples, while other 3D print subscription boxes for the same price only come with four. One of the five samples would always be an exclusive filament, according to 3DPG, which may be a filament made of a substance other than PLA, such as PETG.

A laser-cut filament spool is included in the Mondo box for holding one of your samples for easier printing. The included laser-cut spool, according to Just Vlad on YouTube, looks really cool and would be perfect for spooling samples. He also thinks this box is a good option for people trying out various filaments.

The box comes with discount codes (when available), swag, and access to monthly giveaways, according to 3DPG. You’ll also have the chance to suggest what should be included in potential Mondo boxes to 3D Printing Gear.

FilamentOne is another filament company that sells its own filaments as well as 3D printers from companies including Flashforge and Artillery. Their Profi box is a monthly subscription box that contains 3D printer filament and parts.

FilamentOne filaments, including their Pro PLA, Glint series PLA, special edition filaments, and even unreleased filaments, are guaranteed to be present in each package. The Profi box comes with a 3D printer accessory, which may be a component, an upgrade, or something similar to Alien3D’s UFO box. Customers have confirmed that both of their 1-kilogram spools of filament were of high-quality PLA and that the package is ideal for those who primarily print in PLA.

In addition to discount codes, the package includes swag such as stickers, a magnet, and a coaster. FilamentOne sells the Profi box in 1.75 and 2.85-mm filament options and a Profi Mini box that contains samples rather than full spools.

Easy plan, Explorer plan, and Everything plan are the three different plans available for the package. We’ll go into the All strategy because it’s a hybrid of the other two.

Eight separate 50-gram filament samples come with the Maker Box All plan. Four of the eight samples are different color PLA filaments (or PLA-like materials) manufactured by the same company (the contents of the Easy plan box).

The remaining four are made up of materials filaments from various manufacturers (the contents of the Explorer plan box). PLA, ABS, PETG, TPU, polycarbonate, or other materials could make up these four filament samples. Some customers have remarked that the Maker Box offers a diverse range of filaments, distinguishing it from the majority of PLA-based options available.

Other goodies, such as sweets, stickers, or a voucher for a complete version of one of the filaments, may be included in this package. These products appear in almost every Maker Package, even though they aren’t guaranteed.