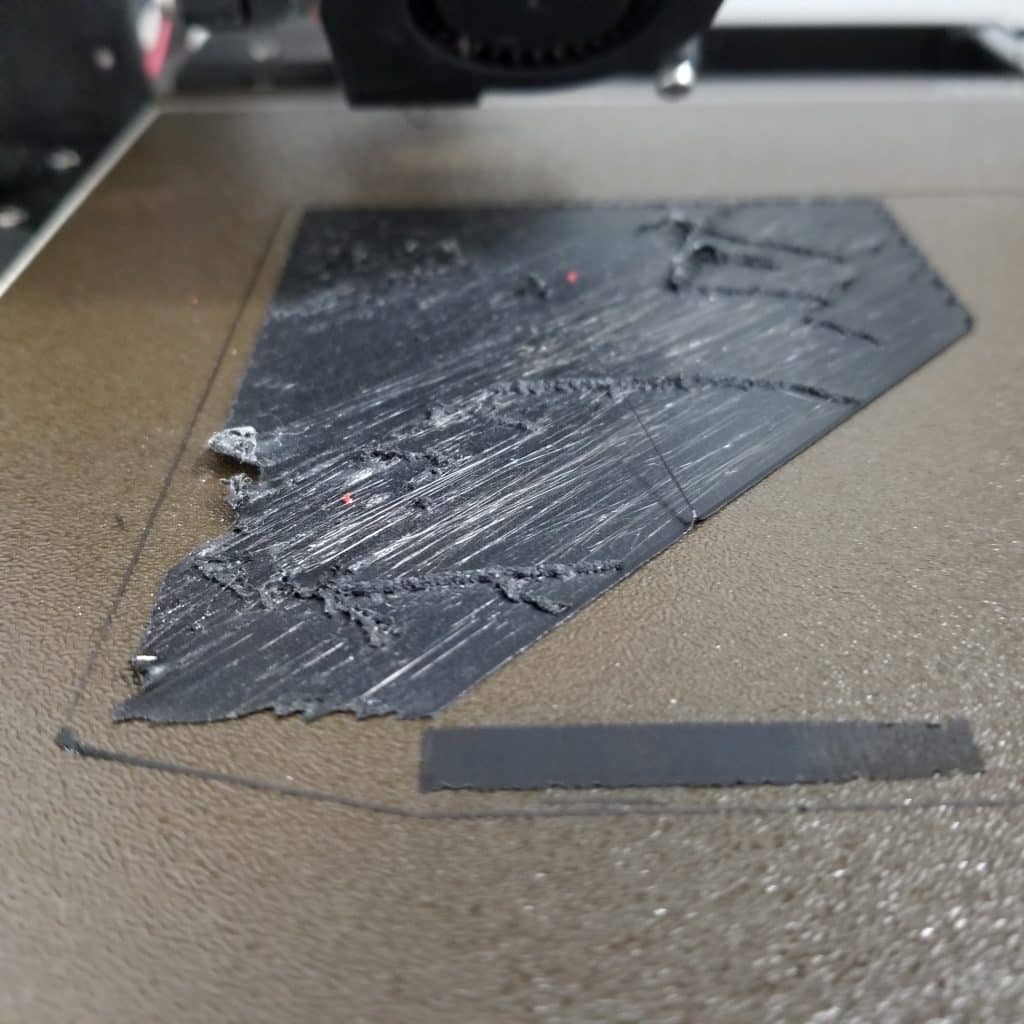 There are a few reasons for filament not coming out of nozzle: nozzle too close to the print bed, blocked nozzle, or you are out of filament.

But once you identify the root cause, you can solve each issue. In this article, I’ll discuss potential causes and solutions for a filament not coming out of your nozzle.

1. Nozzle Too Close to Print Bed

Unbelievably, no filament is depositing on the print bed despite the filament being loaded and the print head operating without a hitch.

Causes of Nozzle Too Close to Print Bed?

It’s possible that your nozzle is too close to the print bed. It’s unlikely that the melted filament will have room to escape unless you’ve adjusted your print bed to only a few microns from your nozzle opening. At best, your print won’t have its initial layers and will be more likely to fail once the filament starts to extrude. In the worst case scenario, you’ll create a buildup of melted filament in your hot end, which could result in a blockage.

Often, all that is needed is to raise the nozzle’s height slightly. Most 3D printers allow you to set a Z-axis to offset in their system settings. You must increase the offset to a positive value to raise your nozzle above the print bed. This also applies to the reverse, where a negative offset can help with the issue of prints that don’t adhere to your bed.

But be careful—if the offset is too great, it won’t adhere to the platform.

If your printer supports it, you can also accomplish the same result by lowering your print bed. However, this is the trickier fix because it calls for recalibrating and leveling the bed to ensure even prints.

You start a print job, but no matter what you do, nothing prints. It is ineffective to remove the filament and re-insert it.

Reduce the possibility that issues like a blocked nozzle will affect your extrusions by performing a little printer maintenance. You’ll frequently discover old carbonized filament inside your nozzle before a clog manifests. There will be subtle signs in the caliber of your prints, even though they may sit there for weeks or even months without your knowledge.

Small imperfections in the outer walls, specks of dark filament, or slight variations in print quality between models are signs of a clogged nozzle that are frequently disregarded. People often say that these flaws are just the small differences we’ve expected from 3D printers, but something more sinister could happen. This can be resolved using a cleaning technique called the COLD PULLor Cold Pull, which we describe below.

If you frequently switch from a PLA to ABS, you’ll frequently observe this. A small amount of PLA is left in the nozzle and heated past the point at which it normally melts. That might imply that it will burn and carbonize.

Likewise, if you switch between ABS and Nylon, you’ll see a similar effect. A puff of smoke frequently appears as the new filament is fed through.

USE A NEEDLE TO UNBLOCK

If you’re fortunate, unblocking might be a simple and quick process. First, take out the filament. Then, if your printer has a control panel, choose “heat up nozzle” and raise the temperature until the stuck filament melts. The nozzle can also be heated by connecting your printer to a computer running compatible control software. Set the thermostat to 220 °C for PLA. Use a tiny pin to clear the hole after the nozzle has reached the proper temperature (being careful not to burn your fingers). A smaller pin is required if your nozzle is 0.4 mm; an airbrush cleaning kit is ideal.

You might be able to force the filament through with another piece of filament if you discover that the nozzle is still blocked. Remove the feeder tube from the print head after removing the filament in the same manner as before. To try to force the stuck filament in the nozzle out, heat the hot end to 220 °C for PLA and then use another piece of filament to push it through from the top. Usually, the additional pressure you can apply with your hand might be enough to unblock the printer if the new filament hasn’t been successful. However, avoid pushing too hard, which could result in bent horizontal printer rods.

Use a needle to push through the nozzle once the end has cleared and a brush to remove any extra filament.

DISMANTLE AND REBUILD THE HOT END

If the nozzle is completely blocked, you may need to perform a small operation and disassemble the hot end. Making notes and taking pictures is a good idea if you’ve never done this before, so you’ll know where everything goes when you put it back together. After removing the filament, carefully disassemble the hot end by following your printer’s manual instructions.

COLD PULLPART I – CHOOSE A MATERIAL

You can use ABS or Nylon for this, but due to Nylon’s higher melting point, we’ve discovered that it produces the most reliable results over time. Additionally, the filament keeps its shape much better. However, ABS is more widely used, so we’ll use it here.

The nozzle temperature should be raised to 240 degrees. We use ABS, but if you use Nylon, check the packaging for the melting point temperature. Let it remain at this temperature for 5 minutes without attempting to push the filament through.

Reduce the temperature (you’ll need to experiment a little for your filament) to 180 degrees for ABS or 140 degrees for Nylon. For five minutes, let the printer remain at this temperature.

Take the filament out of the head. There should be some black carbonized material at the end when you look at it. Continue until everything is clean. Increase the temperature of the hot end slightly if the filament won’t pull from the nozzle.

Did you ever try cold pull? What are you doing when filament not coming out of the nozzle?